In 1924, George Mallory and Andrew Irvine disappeared high on the North Ridge of Mt Everest, never to be seen (alive) again. A search party was dispatched to their high camp to look for the two lost climbers. The only form of communications available between the team members lower on the mountain and the climbers high up on the mountain was to lie blankets or sleeping bags in the snow. The positions the blankets were laid was used as a form of signal between parties. Attached is the note showing the signal code system which the 1924 expedition devised.

The signal's to be made using blankets laid in the snow

Below is the amazing photograph – shot from basecamp using a telescopic lens (pretty high-tech back in 1924), showing the sleeping bags lying in a cross formation on the snow. 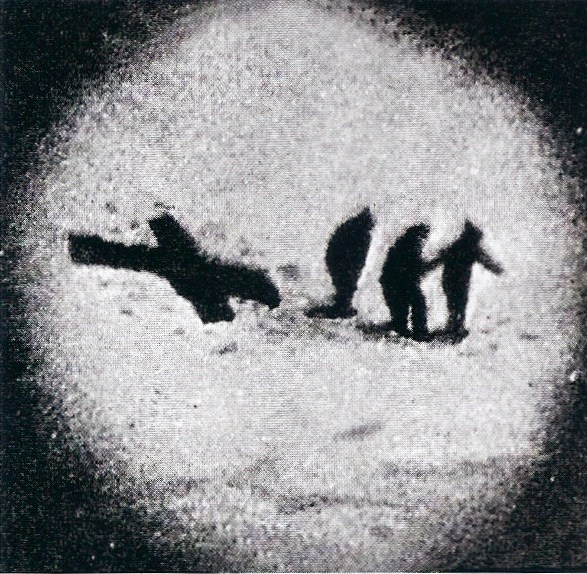 Photograph of the crossed blankets

This was the signal that the climbers from the high camp were conveying to their leaders down at basecamp. The terrible news that Mallory and Irvine were lost and their was no hope. For my attempt on Everest starting in 8 days time, fortunately we will not need to use blankets in the snow to communicate. Having been on a number of expeditions over the years, and spent many nights and days lying in tents or mountain huts during bad weather or awaiting helicopter pick-ups, I know full well the importance that communications with the outside world can have in terms of positively boosting morale. As Everest will be a very long expedition (63 days in total), I have made sure I have a strong communications system in place. Below is a list of the main devices I will be bringing along to communicate with the outside world.

I will be bring a Thuruya XT handheld Satellite telephone with me. This system is amazing. It is the same size as a standard mobile phone – yet gets reception over all of the Asian region, The phone itself retails for US$1,100, however I picked mine for a steal (not literally) at US$400. Calls are also surprisingly cheap with the Sat phone, at around US$1.50/minute – this is cheaper than international roaming costs using a mobile phone.

(Even though it says 160 characters – be sure to limit it to 100 characters only). I can receive these messages for free – however the text messaging system for Thuruya is not particularly robust and sometimes falls over with messages not getting through. If you would like my Sat phone number please drop me a private email to rawly@singnet.com.sg

From base camp at Everest there is 3G mobile phone reception. I will be bringing my Nokia mobile phone (model 2730). This is a very simple phone with limited functionality however suits an expedition very well. The battery lasts for days (literally), as opposed to hours with the latest power hungry PDA/IPHONE types, and it is small, lightweight and fairly rugged. At a cost of S$100-00 this will allow me to stay connected using my Singapore mobile SIM card on international roaming. I have also purchased a Chinese Telecom SIMCARD, which I will use to cut down on call costs. Contrary to popular belief that mobile coverage extends all the way to the summit of Everest these days, unfortunately the mobiles will only work at basecamp and some limited positions above basecamp.

Ian Mullane (who with his two team mates in 2 weeks will head off on a thrilling adventure of his own in a race to the North pole) has kindly loaned me his De-Lorme GPS SPOT Tracker. This system basically tracks my progress in near real-time on the mountain. It then transmits the position via a SPOT communications satellite, back to a central server which publishes the positions online, overlaid on Google Earth. Every ten minutes you can see an update of my position on the mountain! Quite amazing. To be honest, I am not comfortable with the thought of someone monitoring my position every 10 minutes. I like getting away from civilisation when I get into the hills, but having said that – there is so many people on Everest these days I should have chosen another peak if I wanted solitude! I tested the SPOT tracker on Sunday morning. I set off at 4AM on a 110km bike ride around Singapore, with the tracker turned on. 4 hours later I got home and switched on the PC – only to find that yes, I had turned on the GPS unit but – forgot to activate the tracking function so it had not updated any positions! A lesson well learnt!

Attached is the link to the GPS SPOT tracking page: http://share.findmespot.com/shared/faces/viewspots.jsp?glId=0hDXReP9TR1TDblibuZ2DRncN5amQiLbI

De-Lorme GPS on the left, SPOT tracker on the right

The link will not display anything when the unit is not switched on. I am still deciding if I will use this on Everest or not. Maybe I will use it on the 5 day summit push only, however the extra weight and the fact there is two units to carry (the GPS and the SPOT tracking unit) kind of puts me off. A neat feature of the system is the ability to send text messages to Facebook or Twitter accounts. I think I will make my decision once I get to the big hill about how much I will utulise it.

In 1924, George Mallory’s wife received a short 2 line telegram informing her that her husband had ‘been lost’ on Everest. This was how she found out that her husband had died and would not be returning home. Weeks after this she actually received a letter in the post from George himself. Of course it had been sent from the mountain many months before he died, and had taken a longtime to travel overland and by sea all the way from Tebet to the United Kingdom. My wife/ family (and whoever signs upto my blog) will be able to receive emails and updates as regularly as I can write and send them from Everest basecamp! I will have email access and whist visiting China two weeks ago, I picked up (with the kind support of the staff from Geomarine) two data SIM cards mounted in USB modems. I simply plug these into my Panasonic toughbook computer and can connect wirelessly to the internet from basecamp.

So that’s a quick overview of the comm’s set-up on Everest. Its really is getting very easy to stay connected in todays world. You should be able to follow my progress on at least a weekly basis.

With only 8 days to go before I leave for Kathmandu, there is many of things left to do. Packing, clearing work, travelling to Bangladesh for work, training, presentation evening on Friday at the SCC and crazily enough, finalising sponsorship details which have literally come pouring in at the last minute!