When people think of San Francisco the first 4 activities that generally spring to mind are:

4.  Having sex with someone of the same gender

During our visit in April 2013,  Stephanie and I managed three of the above activities before heading off on a five-day drive along coastal highway State Route 1 (SR 1) to Los Angeles.   The scenery and beauty of the environment and people we met are definitely worthy of a blog entry.

A map of our drive is attached here.

It turned out to be a very busy time in San Francisco with a medical convention attracting 20,000 visitors to the city taking up almost all the hotel rooms.  So Stephanie and I tried a system we had not used before called airbnb.  Airbnb is an online platform which allows you to book accommodation all over the world. Generally in peoples’ private residences.  We made a booking with a lady called Clara.  We were a little anxious how it would be staying in the house of someone we had never met.  What a wonderful surprise it turned out to be.  Clara was a beautiful, kind, intelligent and charming lady and getting to know her turned out to be one of the highlights of our visit to San Francisco.  Every day Stephanie and I would leave the house early and explore the wonders of San Francisco, before coming home to Clara’s house and enjoying her interesting company.  On the last night we cooked Clara dinner of fish pie and ate, drank some lovely New Zealand wine, talked, laughed and shared experiences from our different worlds well into the evening.  As an African-American (I am being politically correct although Clara had no problem referring to herself as ‘Black’), explained how the concept of airbnb is really not new at all.  When she was growing up it was difficult for African-Americans when travelling to find hotels to stay in.  So they had a system called the ‘Grey Book’.  Towns had ‘grey books’ which were physical books with names and addresses of people who would open up their homes to travelers.  Clara’s philosophy of being kind to others and treating others like you would like to be treated yourself struck a chord with us and we were very sad to say goodbye to her after 4 nights.  We definitely hope to see her again.

Below are photos from the highlights of our trip – I can’t recommend enough to visit this part of the world if you have the opportunity.

San Fran is a great city to get some exercise when going for a walk – the streets are steep! That’s Alcatraz island out behind me. 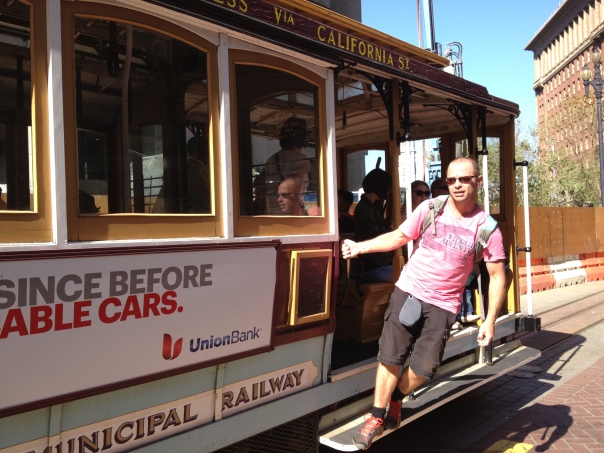 Riding the tram – its cool to hang off the edge as the cars rip past your feet and feel the wind blowing through my hair!

Stephanie on top of the famous Lombard Street – said to be the second most crooked street in the world (behind Wall Street – get it?)

Stephanie and I with Clara at her dinner table after her introducing her to some New Zealand Fish Pie (recipe courtesy of my Mum – thanks Mum!) 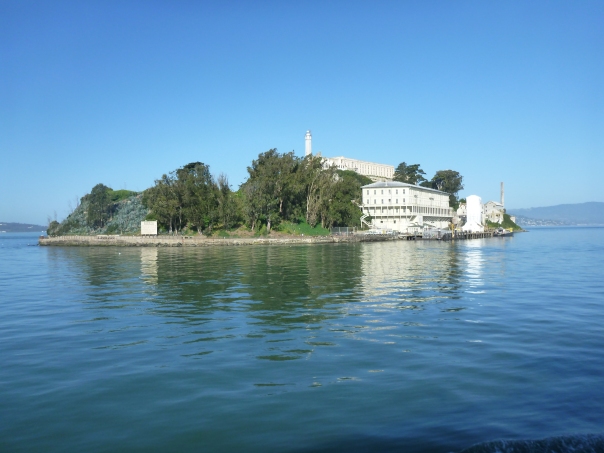 Alcatraz Island – we had a beautiful day with hardly any wind. The island is so much more beautiful than I thought in terms of scenery and nice views.

Stephanie loving being in a solitary confinement cell on Alcatraz. 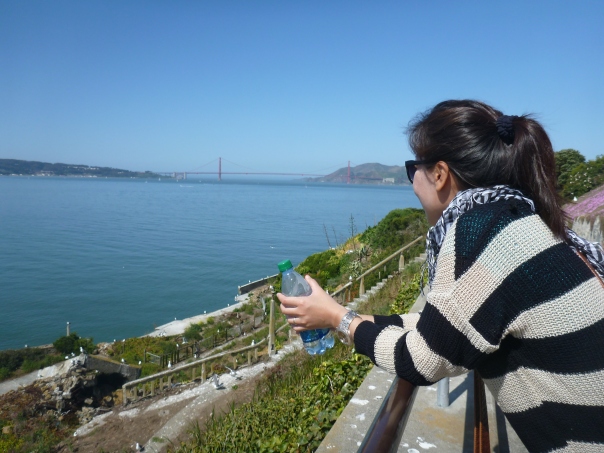 The view from Alcatraz overlooking the Golden Gate.

Stephanie on-board the USS Pampanito – a WWII submarine which saw active duty and sunk 6 Japanese vessels and damaged 4 others. Really interesting to walk through the submarine and see how cramped the living and working quarters were. She is now preserved as a floating museum.

Stephanie being chatted up by Mark – a sailor who served on the USS Pampanito during WWII, now he is over 90 years old.

About to cycle over the beautiful Golden Gate bridge.

Stephanie walking through the coastal redwood trees which are the main attraction in Muir Woods, they can grow over 100m in heights and are many hundreds of years old.

In the early 1900’s most of these beautiful tree’s were cut down. Thankfully people like John Muir and U.S. Congressman William Kent and his wife, Elizabeth Thacher Kent managed to save some of them.

For US$40/day we rented this Chevrolet Camaro convertible which was pretty cool to drive with the top down. 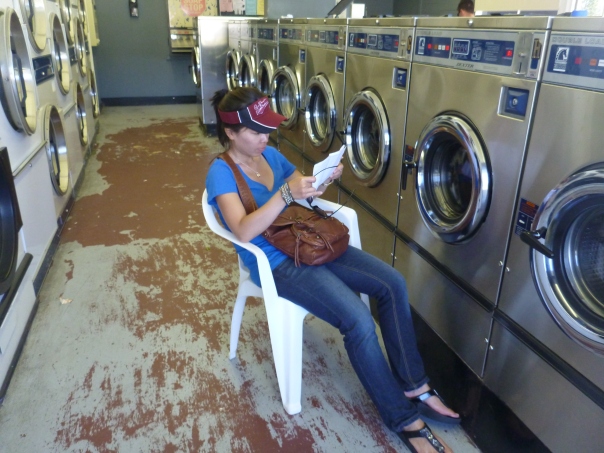 We stayed in the small town of Calistoga in Napa Valley for one night. Calistoga is well-known for its hot springs and therapeutic mud baths. We caught up on our laundry here.

The road follows the coastline along a windy road known as  State Route 1 (SR 1).  The views of rocky coastline and the Pacific Ocean are stunning.

The view from Sharp Park Pier – the Pacific Ocean meets land and the sea gets very rough. 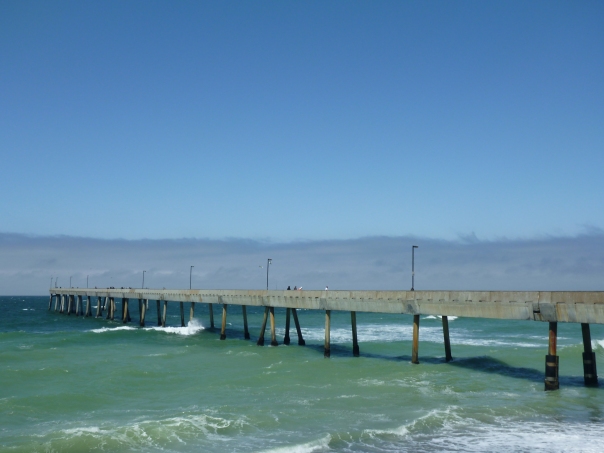 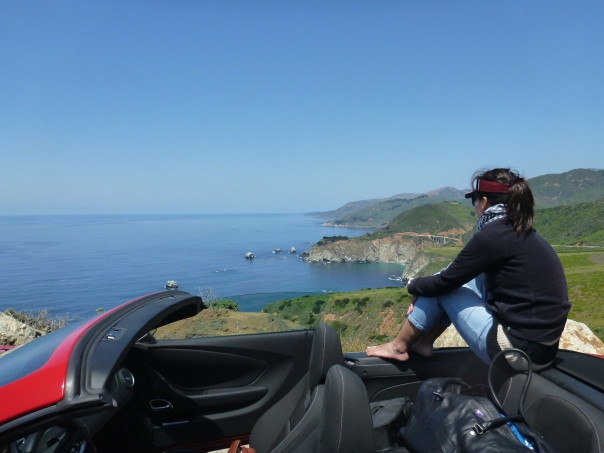 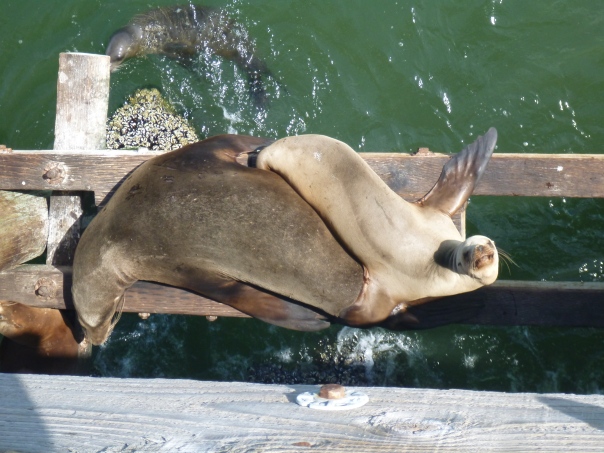 Seals relaxing on the end of Sharp Park Pier.

Stephanie enjoying a sunset in Cambria.

Hanging out in the Big Sur. It’s actually a tiny place.

Lunch in the Big Sur – ribs and grilled prawns – fantastic!

A possum meets a ground squirrel in Cambria.

This little fella was very friendly – not shy at all and came right up to me looking for food.

In Santa Cruz – it seemed like a good idea to ride the Giant Dipper roller coaster just after a bowl of clam chowder.

In the Giant Dipper – with a cheeky monkey behind us. It may be the 4th oldest roller coaster in the USA and made of wood but it still scared the shit out of me and I almost lost the clam chowder.

Stephanie in the town of Monterey – ex Sardine cannery capital of the world, now home to a cool aquarium.

Stephanie trying out an old diving helmet in the Marine Diving Technology facility in Santa Barbara.

All suited up in commercial diver gear with the super cool Dan Vasey at the Marine Diving Technology facility. Dan is the lecturer here and together with his lovely partner Erin showed us some great Santa Barbaran hospitality – beer, seafood, diving and all. Thanks Dan and Erin!

Me blowing bubbles in the tank at the Marine Diving Technology facility. 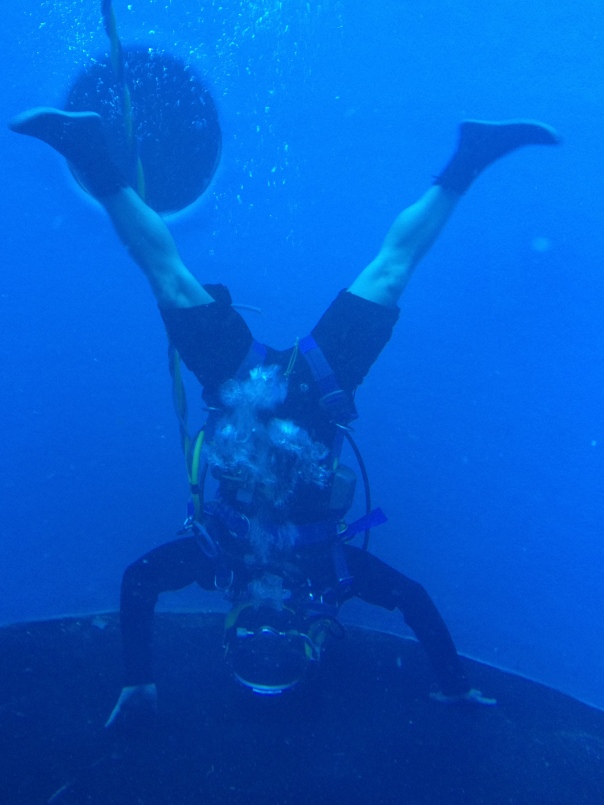 Never miss an opportunity to pull a head stand.

A panorama of the views on the drive – click the image to enlarge.

Sadly all trips come to an end…. Thank you California for the wonderful time and beautiful memories.