Inspiring People: Sandy Robson and the art of Spelunking and She Wee’s

For the past seven days, my wife Stephanie and I have had the pleasure of hosting a lady who is retracing the steps of a chap named Oskar Speck.  Oskar happens to be this this dead German guy who in the 1930’s made perhaps one of the greatest kayaking voyages of all time. After being made redundant during a depression, Oskar decided to leave Germany, not by traditional modes of transport, but in a folding kayak with a mission to ‘see the world’.

Seven years later, this remarkable man finally ended his journey by paddling onto dry land land in the north of Australia having traveled some 50,000 km in his kayak all the way from Germany. Bearing in mind these were days long before GPS Navigation, mobile phone coverage and Google Earth mapping existed, coupled with the fact that Oscar himself could not even swim, meant it was one hell of an adventure with some massive challenges to overcome along the way.  Far from the warm Aussie reception that may be expected upon completion of such a journey – Oscar did not apparently have the gift of choosing the best timing and arrived in 1939, just as World War II kicked off.  Being of German stock, he was immediately locked up for the duration of the war!

Fast forward some 70+ years and Australian woman Sandy Robson decided to set out on her own journey to see the world. Sandy is retracing Oscar’s epic trip and set-off in 2011 from Ulm in Germany.  After arriving in Singapore on Friday 17 April, 2015 at 2:20PM she has paddled around 12,000km.  Due to political and safety concerns in certain area’s including Syria, Iran and Pakistan she has had to skip certain portions, none-the-less hers is a remarkable journey in it’s own right. 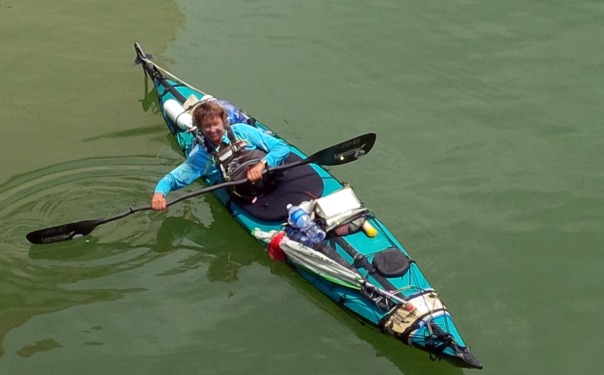 I first came across Sandy, whilst researching information on my upcoming human powered expedition (details to come later) on the internet.  Noticing her route was passing through Singapore I reached out to her through that wonderful communications system Facebook (another thing Oskar Speak had to do without), and offered her my assistance as she paddled her South East Asian leg.  Since that time in late 2014, I have assisted Sandy with my network of contacts in Bangladesh (thank you Shahin and Tasnuva), Singapore and Indonesia (Thank you Pak Budi) with security permissions, permits, press, immigration, equipment storage, speaking engagements, accommodation and the many other logistical and bureaucratic arrangements that go into journeys like this which cross multitudes of international borders.

Much has been written about Oscar and Sandy’s journey in various press, so I thought this post would focus on one or two things that you will never read in the newspaper or see on the television, a brief peek at  the behind the scenes life of Sandy.

One of the questions that many people want to ask but often are too polite is – how do you go to the toilet when paddling your kayak for 8 – 10 hours a day, often without coming into shore?  Sandy shared her secret to this last night as we sat around having our final meal, and with her permission she agreed to me sharing it with you on this post.

Sitting inside a wobbly kayak a few kilometres off the shoreline in strong winds and choppy sea’s is not an ideal place to try to take a pee.  For a man – it is more straight forward  as you can see from this short video clip I took from my kayak in the middle of the Cook Strait in New Zealand.  Being a lady is not so easy however, Sandy’s system is to use a small plastic funnel called a She Wee.  The She Wee directs the pee into a small bottle also held in the cockpit which is then emptied over the side at the end of the job.  A quick rinse of the She Wee in the sea water and everyone is happy and onwards to Australia Sandy goes!  Attached below you can see a picture of the She Wee, and also Stephanie my wife’s good fortune to be given a first hand look at Sandy’s personal She Wee just as she finished her dinner.

Close up of the ‘She Wee’ 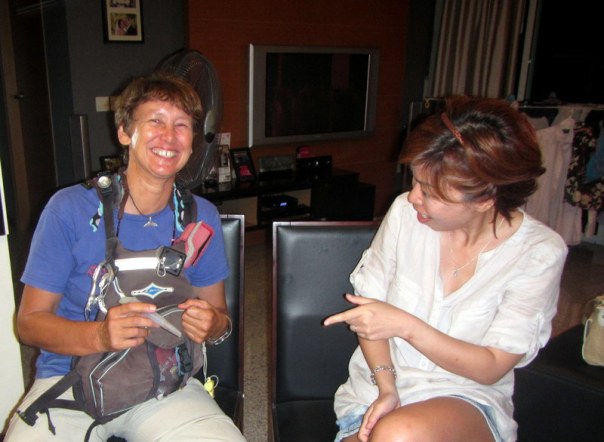 Look at the size of that! Sandy Robson showing off her She Wee to Stephanie Rawlinson

That answers the peeing question. What then happens if you need to do number 1’s?  The big one? Drop the boys off the pool?  Give birth to an alien? (Or whatever term you use in your particular country for taking a dump)    Well Sandy introduced me to an entirely new concept here called ‘Spelunking’.  If you look up Spelunking in a dictionary you may see it referred to as the sport of caving or potholing.  Sandys definition of Spelunking refers to a cave of a different nature and she patiently explained to me that Spelunking in kayaking terms is the art of taking a crap in the water whilst one is swimming.  Sandy also explained that this is normally an emergency measure and she normally plans things out so she is on dry land when she needs to answer this call of nature.

This morning as 7:20AM my trusty climbing partner Alan Silva and myself waved goodbye to Sandy from Tanjung Beach on Sentosa Island here in Singapore.  As Sandy waved back to us and paddled off on her journey south towards Batam Island, Indonesia, a tinge of sadness swept over me.  Sitting in her little red kayak, she looked so small compared to the open ocean, the massive ships, the strong currents and thousands of kilometres of journey I know lay in wait for her.  I felt honoured to have been a tiny part of her remarkable expedition.  To see first hand, how hard this petite, fiercely independent,  48 year old Australian lady (with a complete hip replacement) works, day in/day out, to make her dream into a reality.  Sandy would be awake all hours of the night, working away in our tiny spare bedroom, cleaning and sorting equipment, planning and researching her route, communicating and making contacts, fulfilling press obligations, preparing her keynote talks to raise the critical funds she needs to sustain herself financially, and the list goes on.  The next morning she would generally be up and gone before we even rose.  Her energy and drive were incredible, and to anyone who may be thinking she is on a gloriously relaxing holiday, I can assure you that it is in fact very, very hard work. 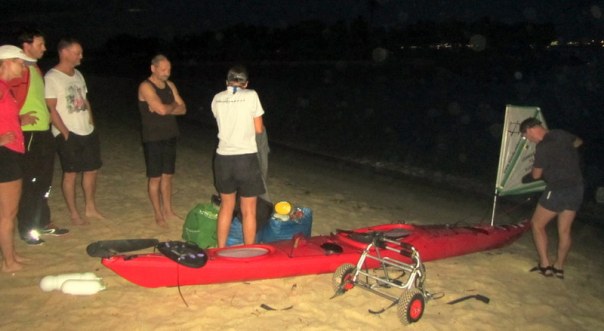 What lies ahead of Sandy is 10,000km of perhaps the toughest paddling of her entire journey.  The monsoon winds have turned now, from the North Easterlies which would have blown her down towards Australia, to the dreaded South Westerly monsoon which she will be paddling directly into.  The ‘Selats’ or Straits between the Indonesian Islands have massive tidal streams reaching 5 – 8 knots (4m/s) current speeds.  Currents that swept Oscar Speck 20km out to the open ocean before he could escape their awesome clutch.  Pirates, crocodiles, Komodo Dragons, 200km open sea crossings, lightning storms, and being in foreign lands where she does not speak the language.  Day after day, night after night, for 1.5 years more (or for ‘as long as it takes’ according to Sandy), she will continue her journey. But far from feeling sad, worried, or even anxious for Sandy, I reminded myself I should be happy.  For those of us fortunate to know Sandy we should feel proud.  For those who have never met her then you should feel inspired.  Sandy has the experience, the skill and the mental and physical strength to finish this journey.  She is living her dream, every single day and night, month after month, year after year, doing something she loves.  In terms of expedition style, hers  is a role model –  environmentally friendly, naturally powered and minimal impact.  No raping of the world’s non-renewable resources for short term glory here.  She is setting a tremendously positive example about what can be achieved in a sustainable manner and above all, is having one hell of an adventure.  I cannot wait for my next adventure – how about you?

This interview features in the Inspiring People section of my website.  Not ‘inspiring’ in terms of making billions of dollars from raping the planet and the earth’s resources, but tales from ordinary people who do extraordinary things, who get out and make positive impacts, who send positive messages through the way they live their lives.  We all have a part to play in our future.  I am very excited to share these stories with you and if at least one of them can touch and inspire you to make positive changes then I will be very happy!