The icing on the cake?

“It is by riding a bicycle that you learn the contours of a country best, since you have to sweat up the hills and coast down them.”

This wonderful quote by Ernest Hemingway sums up my feelings towards the last 6 days of cycling as we peddled our way down through the beautiful South Island of New Zealand.

I have previously driven in a motor vehicle much of the route we have ridden.  However by cycle you get a completely different feel and appreciation for the land.  The passes, the rivers, the hills, and the scenery that I have swept through before at 100km/hour without barely registering, now have much more meaning.  The Hundalee mountains south of Kaikoura, the long straight’s of North Canterbury, the mighty Rakaia Gorge and the slog up to Burkes pass at 709m outside Fairlie.  They all made us sweat and struggle.  The rewards were their stunning scenery, and the knowledge we had journeyed through under our own steam, huffing and puffing up the inclines and gratefully gliding quietly down the slopes.

Our journey south has taken us through farmland, past vineyards, through forests, around emerald green/torquoise lakes and alongside the deep blue ocean.  The sun has shone every day, our legs have gone brown and our muscles are sore.  But we have finally arrived in the small town of Twizel, only 60km from the base of New Zealand’s highest mountain, Aoraki/Mt Cook.  From Mt Cook Village, we will attempt to climb over 3000 vertical metres all the way to the summit of Aoraki/Mt Cook.  Here our journey from the highest point in the North Island of New Zealand to the highest point in the South Island, will officially end.

When planning this expedition – we always knew that the two ‘crux’ points would be kayaking the Cook Strait and climbing Aoraki/Mt Cook.  These two places are both beautiful and deadly.  Here  mother nature is firmly in control.  No human beings venture onto Mt Cook without her permission and without giving her the utmost respect.  Tomorrow we leave Twizel for the final 60km cycle into Mt Cook Village before our climb.  If ‘Peak to Peak 2013’ was a cake, then climbing Aoraki/Mt Cook would be the icing on the cake.  The question is then, will our cake get iced?

The beautiful Rakaia river as seen from the bottom of the Rakaia Gorge. 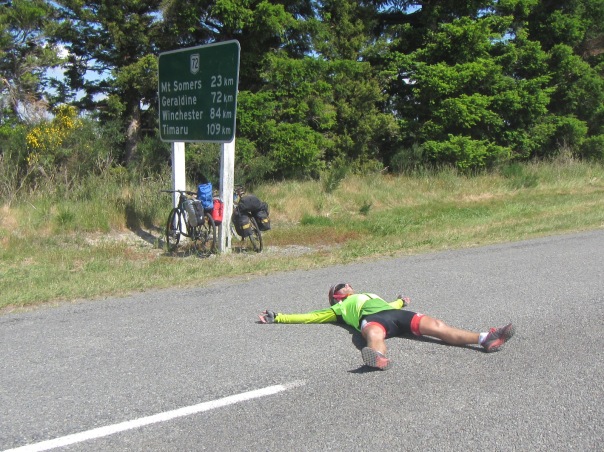 It was so hot on the ride south I tok a rest wherever I could! 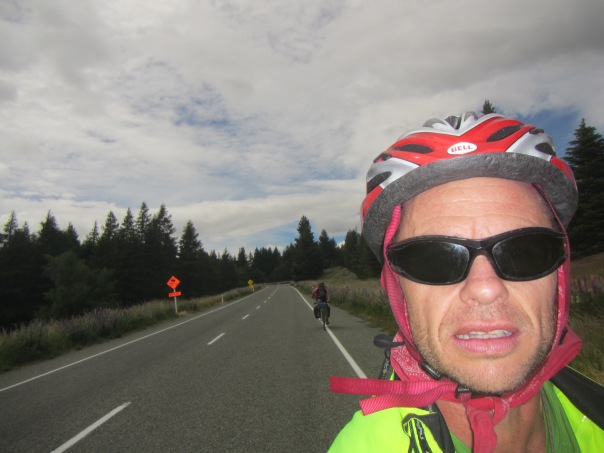 Riding upwards towards Burkes pass at 709m, outside the small town of Fairlie.

Who says there are no Wallabies in New Zealand? This is the first time I have ever seen one, unfortunately dead after bing hit by a car on the side of the road.

Coming down into beautiful Pake Pukaki. On a clear day Aoraki/Mt Cook is clearly visible at the end of this lake.