May 3: Flaming pants and round 2 coming up

The most exciting thing that has happened to me in the last 5 days stuck here at basecamp is my pants caught on fire when I got to close to the heater. I can report there are no long term physical injuries except to my pants and my pride. I had been complaining for the last few weeks that the heaters were not strong enough. I have stopped complaining now.

I have made a short YOUTUBE video here of a tour of Everest basecamp. We have a beautiful basecamp, especially considering everything is temporarily set-up in tents at 5200m in very strong winds. It is so nice in fact I thought a tour of the tents was worth a short video.

The view of the North Face of Everest from our basecamp here in Tibet is mindblowing, breathtaking, spectacular and mesmerizing. I can never get enough of staring at it, anytime of the day. It sends shivers down my spine when I see the plume of snow raging off her summit. Even at night time as I head for my tent I can makeout the ominous huge dark triangle of the North face.

From basecamp, mentally Everest has the upper hand over me. The same as many problems in life, they often seem larger when you stand back and stare at them. From basecamp Everest looks too huge, too windy and too high for humans to climb. It is not until I am on the mountain, climbing on her flanks, doing battle step by step, higher and higher that I can finally believe I have a chance of summiting her.

I attach two photo’s below. One showing a windy day on Everest (today) with the huge summit snow plume, and the the other a day with hardly any wind and no snow plume for comparison.

The last few days have been spent waiting at basecamp and looking and discussing weather forecasts. To a point I am sick of talking about the weather. Thankfully it looks like the winds which have kept us pinned down for the last few days will subside tomorrow. Allowing us to leave on round 2 of our acclimatisation. We will make a long single day push from basecamp, skipping Interim Camp at 5700m all the way to Advanced Base camp at 6400m. I expect to be very tired tomorrow night.

I am extremely excited about this next acclimatisation push to get higher up on the mountain. I hope to reach between 7300 -7500m. Getting high on the mountain is what I dream about. This is where I want to be. Pushing myself as hard as possible, high up where every step is taken with care and has consequences. I can’t currently think of anything more exciting and beautiful in my climbing ambitions than edging along the summit ridge to the summit with 3000m of exposure under my feet. Unfortunately I have to spend a great deal of time ‘plodding’ between Basecamp and Advanced Base Camp but this is part of the cause.

I would like to say a big thank you all those people who are following my trip. To those people who make comments, I try to reply individually to each one, however due to restrictions to the internet here in China this is often difficult.

Thanks again to David Lim who will make short updates on my progress over the next acclimatisation cycle.

Until next time, this is Axe siging out from an Everest Basecamp currently being battled by wind and snow. 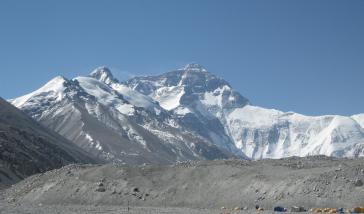 mountain with no plume small 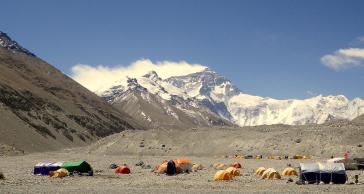