← Mental Strength – how tough are you?
Name the facebook page →

Singapore is not an ideal place to train to climb Mt Everest.  However stuck in a hotel in Hanoi is probably worse.  This week in between moving house, I spent 3 days in the far north of Vietnam on business, and had to squeeze my Everest training in around the usual hectic work days involving endless presentations and meetings, lunches and dinners with customers and agents, then frantic late night emailing once you get back to the hotel in an attempt to catch up with the backlog that builds up during the day.

The hotel had a typically pathetic room with a handful of weights and some tired looking treadmills, with the label ‘gymnasium’ stuck to the door.  What it did have that was great however, was 22 flights of emergency stairs which I took full advantage of.  6 sets up and down these  stairs saw me lathered In sweat and breathing in a similar fashion to what I was while climbing Aconcagua at 6800m in Argentina a few years back!

It was great this week to get the first in a series of videoblogs on ESPNSTAR.com released.  I have had a few interesting comments about my presentation style, some people have even suggested I appear a little feminine!!  So I better man up a bit for the next one!! If you want to check it out go to http://www.espnstar.com/media-player/ then choose Other Sports –> The Hit Squad.

Meanwhile my hunt for sponsorship continues.  So far I am very happy to say I have 5 confirmed expedition sponsors for Everest 2011.  They are: FITNESS FIRST, UFIT, thePRelement, EXPAT Living Magazine and Everest Motivation.

This week I have been lucky enough to sign up the latest Everest 2011 expedition partner – Balanced Living.  Run by a lovely lady called Dana Heather,  Balanced Living, will be supporting my climb with nutritional advice and products – all 100% natural!  Through Balanced Living I will be trialing some special products called SUPERFOODS during my training phase and on Everest  itself in 2011.  Being 100% natural,  extremely nutritious, very tasty and in a form which easily allows my body to break down and access the nutrients –  I hope it’s really going to help me out, especially at altitude, where I will be burning enormous amounts of calories yet having little appetite.    More info to come on the nutritional side so watch this space!

I have been working hard over the last few weeks to find a local organization supporting underprivileged children to partner with that I can support through my climb.  After  approaching and meeting with a number of the larger Singapore based non-profit/charitable organizations, I was struggling to find any synergy.  I was looking for an organization which :-

3)      Was helping children from underprivileged backgrounds

4)      Was non-political, non-religious or race based

Fate intervened and I was introduced to another kiwi – Mark Philpott, who just happened to be from my home province of Taranaki in New Zealand.   Mark has founded the HUMANEITY foundation (yes that is the correct spelling), based here in Singapore and we will be working on a very exciting project supporting children, which I will reveal more of shortly.  I will also be supporting the Central Asian Institute  which is working with children in the remotest parts of Pakistan and Afghanistan.

To any readers of my blog, if you happen to know of any potential sponsors who may want to be involved with my climb in 2011, please pass on my contact details – I would be very grateful!

Well my belay partner Mr Lamb was unavailable for a rockclimbing session this morning, he decided to go diving in Sipadan instead. So together with my fiancée Stephanie, we did a stair training session in Bukit Timah Nature Reserve.  We bumped into Joanne Soo, a member of the Singapore Woman’s Everest Team who in 2009 summited Everest via the South Col Route (see photo below). 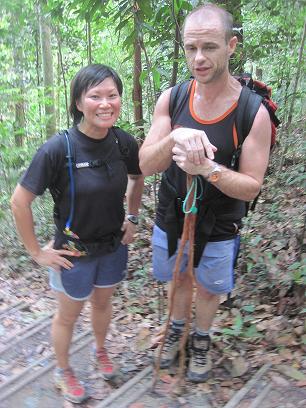 Until next blog – Axe on Everest 2011 signing out…

← Mental Strength – how tough are you?
Name the facebook page →