Hello from the small town of Katherine in the Northern Territory – some 320km from Darwin’s Cullen Bay Marina where I started. Day three was a short ride of 93km from Pine Creek to Katherine. I did not sleep so well during the evening and rose at 5am on day three with the intention to leave in the dark at 6am.  But things did not work out that way and I farted around uploading a video to YouTube and having breakfast so did not hit the road until 730am. This turned out to be too late as by 11am it is starting to get so awfully hot that Cycling from then onwards throughout the afternoon is an exercise in suffering.  (The YouTube video of Darwin  is here)

I stopped after 48km for a muesli bar, Apple and a drink, then pushed on with just one more quick stop until Katherine. This was my first introduction to a longer stretch without anything inbetween in terms of water stops or towns etc. From Katherine onwards the distances between resupply points will get longer and longer – upto just under 300km.

I was buggered from the heat when I rode into Katherine and found some shade on the Main Street and ate a pie, a sandwich and a banana milk followed by an ice block.  Katherine is a small town with a large population of indigenous people and is quite sad to see a lot of drinking in the Main Street even during the day time.

Today is day four and I had an active rest day – heading with film producer Alistair into the Katherine Gorge for a short boat trip and a beautiful if not sweltering hot walk back out.  We had wanted to kayak the gorge but it has some Crocs in there now as per the picture attached – we saw this smaller one from the boat.

Tomorrow is another 110km day and I will try and rise and leave earlier to beat the heat – I am starting to get scared of the heat – it really is pretty awful to try and ride in.  I also got passed by a large truck far too close for comfort yesterday – at 100km it made no effort to give me any room even though I was on the shoulder and roared past less then 0.5m away. I would have loved to meet the driver. 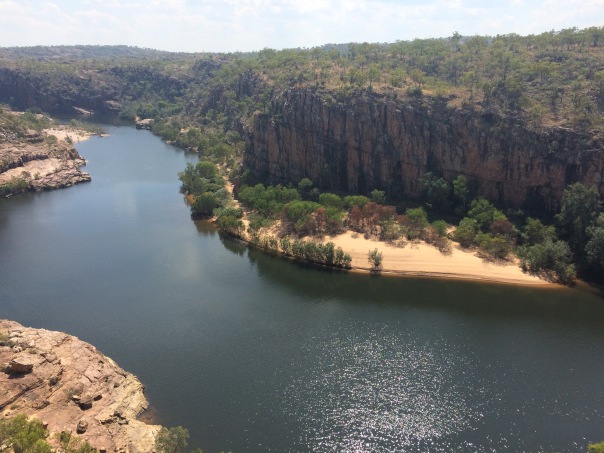 That’s all from Katherine!