Inspiring People: Max Maximeflon, Three reasons why you should let complete strangers into your house

“Be wary of strangers”.  Most of us will be familiar with having this life-lesson drummed into us since young.  You only have to read the news to see shocking examples of random violence, dishonesty or sexual crimes committed by people seemingly unknown to one another.  Worse still we are warned – NEVER invite a complete stranger into your house!  John Saul an American suspense/horror writer wrote: “If you open your house to strangers, who knows who might come in. And what they might be after. Or whom.” Whilst the quote does not specifically mention anything negative, it is hard for us NOT to conjure up the sinister overtones.

Yet by following this adage we can be missing out on some of life’s most amazing and fulfilling experiences.  The chance to meet new people, to open our eyes to new experiences, to share time and a meal with someone we have never met and to be inspired.  My richest experiences and memories from 20 years travelling and adventuring have actually come from the people I have met along the way, complete strangers who have shown me acts of kindness yet expected nothing in return.

Here are the top three reasons I believe we should consider inviting strangers into our house.

Reason One – Become a great ambassador for your country

Recently outside their home, my mother and father once came across an older couple, riding bicycles along the road.  As the evening was getting late, my father stopped them and asked them if they needed a place to stay for the night.  It turned out the couple was from Germany, they were on a cycling tour in New Zealand, and they indeed needed a place to stay as it was late and they were tired.  My mother when recounting the story to me later, told me how embarrassed she was, as she did not have time to cook them a proper dinner and instead prepared them something quickly as it was late.  When hearing this I told my mother that instead of being embarrassed she should be proud.  As that one simple act of kindness that her and my father had showed, would have created the most powerful, positive and lasting memories that any traveler can experience.  The opportunity in a distant land to be shown kindness from strangers, be invited to someones home, and for a few short hours get a glimpse into their life.  And when these cyclists returned to Germany they would retell this story to so many people, about how complete strangers in New Zealand would stop them on the side of the road and invite them to stay for the night.  What better reputation for a country to have? 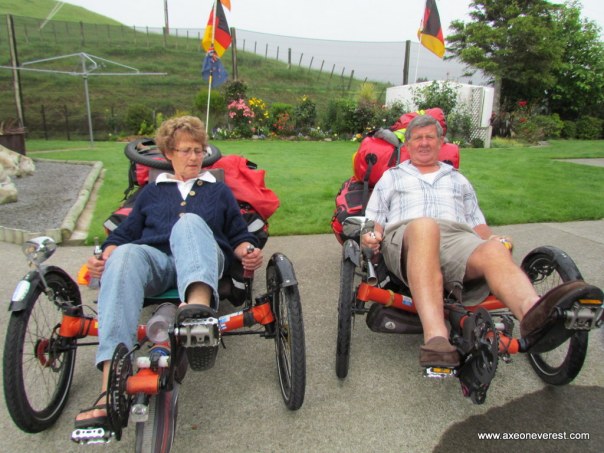 Jack and Ngaire Rawlinson get a chance to try out German cycling technology.

David Lim my climbing partner makes new friends in the Shepherds hut on the side of Mt Damavand.

In 2007 I spent two weeks mountaineering in Iran with my climbing partner David Lim.  We had no guides and climbed independently.  I was terrified of travelling to Iran, and had images of being chased down the streets by mobs of crazed Iranians who may have mistook me for an American.  So I made the decision to keep a very low profile, to avoid contact with people and get in and out as quietly as possible, hopefully talking to as few people as possible.  Towards the end of our expedition we had reached the summit of Mt Damavand, the highest mountain in the country and were exhausted on our decent.  We made it down to the lower slopes of the mountain, where we had arranged a 4-wheel drive to collect us. However there was some delay.  As we were setting-up our small tent I noticed some shepherds in the distance around a stone hut.  They were gesturing and pointing at us and my heart was in my mouth as I realised my worst nightmare was about to unfold.  Here in this remote region of Iran, we were going to be attacked by a crazed mob of Iranian’s who would take out years of frustration and resentment against the west, upon me.  But instead of beating us, they greeted us, and even though we shared no common tongue, through sign language they invited us into their very basic home for the evening.  That night they slaughtered a sheep and cooked us a beautiful dinner, complete with mug after mug of Iranian tea, and instead of our tents we slept on a comfortable carpet on the floor of their hut.  It was an incredibly rich experience for me and that one evening broke down any of the negative feelings or perceptions that I had forged from the media about Iranian people.  Over the last few days of the expedition we got to spent more time with Iranian people and I found them to have a deep and rich cultural history and without exception were intelligent, warm and incredibly friendly people.  How wrong my initial conceptions had been before those strangers had invited me into their house.

With my new friend, an Iranian Shepherd is his simple but comfortable hut on the side of Mt Damavand.

I am a non-religious however I do like this quote from the bible:

Alan and I with Max Maximeflon – the friendly Frenchman who allowed us to sleep in a tent in his garden when all accommodation was booked out.

In August 2014 I was on a 2000km human powered-journey between the summit of Scotland and the summit of France. After 1500km of climbing, kayaking and cycling we arrived on day 14 in a small town called Provins in France.  Out visit coincided with their summer festival and consequently all accommodation was booked out.  We were tired at the end of the days cycling and ended up at the village information centre.  They politely told us there was no more options for anywhere to stay for the night.  My heart slumped as I stood at the counter, wondering what to do.  Then a young man named Max, who worked at the Information Center, overheard the conversation and invited Alan and myself to set-up our tent in his garden.  We would have slept in a chicken coup by this stage so we gladly accepted.  Max also invited us out with his family and friends that evening to the village festival.  We drank beer, ate and talked long into the evening.  It was a wonderful experience and when we left the next morning I felt priviliged and fortunate to have met Max, but at the same time, slightly guilty that he would not accept any money from us as payment for us staying with him.  A few weeks later I received the following email from Max and it was then that I realised that Max had in fact received something from our visit – by opening his house and allowing two complete strangers to stay for the evening he had received the gift of inspiration.

Dear Grant, (if you please, can forward this message to Alan because it’s also for him)

Life can be something about chance, destiny or providence. Because i’m believing in God i truly believe now that meeting you was providence. Your trip, your personality, your force give me so much inspiration & power, i feel much more stronger. I discovered your website, & i was really impressed about all this big things you made but also about what you call “micro-adventure”. I laughed a lot when i red all the part about your staying in Provins. I was supposed to go for an expensive weekend trip in Copenhagen, finally i moved my plans, i decided to organize my first micro-adventure: 3 days of hiking in the alps. I like to be a leader, to be the guy who is in charge of the organisation, planning the best way, create the right team. We were 4, unprepared, inexperienced people but ready to make in 3 days 35km, 1000m elevation, sleeping in tents (the fashion one, the one you used !). This hiking was really to hard for us, but because of our mental strength, of your inspiration, we made it & it was great, heavy bag, frozen tent in the morning, bad choice of food, thin sleepy bag, too technical lakes for fly fishing…mistakes of beginners but it was fine.

On the second day, we stayed at the lac du Pormenaz, I decided to go by my own on the top of the mountain on “la pointe noire du Pormenaz” 1950M to 2320M at the summit. I made the trail (with a little bit of climbing at the end) in 1h40 round trip. I’ll never forget my “pointe noire” because it’s my first one, & i’m a little bit proud.

Grant, Alan, you opened a box in my life, a box full of mountains & new experience. I feel much more stronger & i will use this experience as a lever in my personal & professional life. I will try to move things in my life (more sport, less cigarettes) to go higher & higher, to push the limits, step by step, safely.

Many thanks & cheers (because we both like good beers & beautiful landscapes)

I have created the INSPIRING PEOPLE section on my website, where I interview people who are doing inspiring things.  Not ‘inspiring’ in terms of making billions of dollars from raping the planet and the earth’s resources, or undertaking activities that burn copious amounts of fossil fuels.  But tales from people who get out and make positive impacts, who send positive messages through the way they live their lives.  We all have a part to play in the future of our planet.  I am very excited to share these stories with you and if at least one of them can touch and inspire you to make positive changes then I will be very happy.

Posted on November 23, 2014, in Inspiring People. Bookmark the permalink. Leave a comment.