← Hello England!
The ANZACS have landed! →

Greetings from very wet and cold south coast of England.  Alan and I arrived yesterday in Rye Harbour and are in position to attempt our kayak across the English channel tomorrow at 11:30AM.  But first a quick wrap up of the last 5 days since the last blog.

Day 6 saw us travel from Carlisle down through the Yorkshire Dales, and across the Pennine range.  The countryside was very pretty farmland and as a kiwi I definitely appreciated the enormous amount of nice looking sheep scattered around the fields.  However the price we paid was the hills. Oh the hills. Hill after hill after hill.  Fortunately we had great weather and an early start so slowly plodded along, up and down, through the numerous tranquil and beautiful small villages which grace Yorkshire.  Eventually with screaming legs after 118 km we reached the small village of Leyburn and stayed there the evening for a well earned rest.

Day 7 we travelled from Leyburn down south to the city of Doncaster.  Again we were confronted with a morning of hill after hill and after topping up on a delicious lunch in Harregate we kept pumping the peddles and the land got flatter as we hit the city of Doncaster where we stayed the night.  My Mum always told me if I had nothing nice to say about something then dont say it, so I have nothing more to say about Doncaster. EXCEPT for the fact is it very industrial.  And when we went to the bar the barmaid told Alan she ‘loves his Australian accent’.  I mean seriously, I like Aussies but who the hell likes their accents?  It was that kind of place.

After a crap sleep due to people getting married in the hotel and by the sounds divorced the same evening, we were happy to leave the next day (day nine) in more fine weather for the cruisiest run of the trip, 128km down to the city of Boston, cruisy because the roads were flat and we had little traffic – all in all very nice.My legs by this point were starting to tell me they needed a rest but we don’t have the luxury of rest days at this point so the next day, back on the bikes and we belted out another 125 km to reach the town of Newmarket, a pretty place and the horse racing capital of the UK.  Here we were fortunate to be put up by my friend Steve’s Dad Tony and were invited around to a party in the village which lets just say saw Alan and  I get home at 3:30 am after a number of beers and birthday cakes and laughs with some very hospitable and friendly people.

Hence the next day (day 10), my sore legs combined with a late night saw us with a very late start of 11AM and we managed only 80km, before we called it quits just north east of London in Brentwood.  We were chaperoned that day by my ex-Singapore rugby mate Mr Ian Slack, who was the picture of perfection in hospitality, riding with us, guiding us through the back roads, his sons cooked us a delicious lunch at home, and we were sad to say goodbye in Brentwood at the end of the day.

Day eleven was to be our last day and we had a big day to get through London, over the Thames and all the way down to Rye Harbour.  And it rained and poured all day.  I was not to concerned because I had invited long time mate Barclay Morrison along, he lives in London and loves cycling so I was sure he would be a good guide.  Alas I as mistaken, and Barclay had no idea where to go, so I was back on my blackberrry trying to navigate through the outskirts in London in the pouring rain.  After 5 minutes of cycling in the wet and cold the novelty had warn off for Barclay and he started to talk about his need to pull out and head home early for some urgent ‘admin’ jobs.  Five mins later Alan had a puncture and he sat on the footpath and fixed it while we got cold and wetter.  Five mins later, BOOM, my entire back wheel blew out, tearing the actual tyre as well as mangling the inner tube completely.  We found a small warm spot in a cafe to sit and Alan set about sewing my inner tube back together with needle and thread, good enough to get us to a cycle repair store, which Barclay finally proved some help by locating with his phone.  So by 12 noon we had only got 15 km and were colder and wetter with 110 km to go for the day.  Barclay left us at the Woolwich under Thames river crossing and we set off in the heavy rain for Rye Harbour.  Hill after hill, wet cold and miserable, my chain soon fell off and we had more repairs to do in the cold and finally at 8pm that evening we pulled into Rye Harbour, 1020km after leaving the summit of Ben Nevis and we had reached the south coast of England.

We were very happy to have a shower and eat some warm food last night.  We slept well and today we have cycled another 50km down to Dungeness beach where we will actually depart from tomorrow morning at 11:30AM to paddle across the channel to Boulougne in France.  My legs are screaming at me for a rest, my quads hurt if the wind blows on them and tomorrow even though we will be paddling around 40km, at least my legs will have a break.

Apart from that all is good, Alan is a great partner to have, he has been getting slow towards the end of the days and has been suffering the flu but as usual never ever complains.  We are excited about our channel crossing tomorrow – you can follow it on live on our realtime GPS tracker at this link or click the map image on top left of screen. Unfortunately I cannot upload many photo’s from the road as there are almost NO internet cafe’s in the UK anymore (where did they all go?) and the one I have found here today has such a slow connection speed that just the couple attached here has taken 30 minutes.

Some small YOUTUBE video updates are attached here – only 30 seconds long each:

That’s all from me, hopefully next update from France! 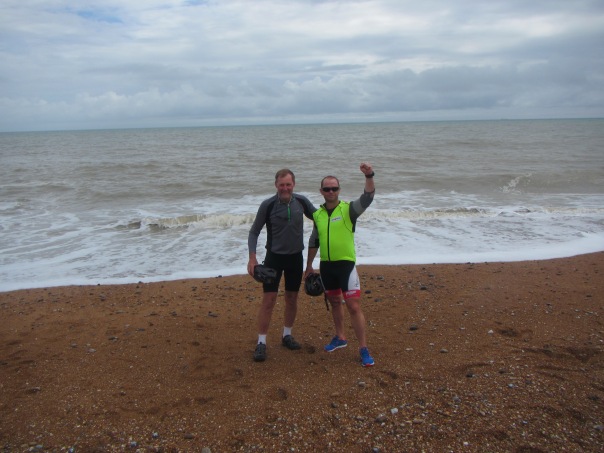 Alan Silva and I on Dungeness beach, 1050 km from Ben Nevis and the spot we will depart in the kayaks tomorrow.

With the Slack family, Barclay and Sally at the end of another day in Brentwood.

Cruising along with Al….

← Hello England!
The ANZACS have landed! →