Tomorrow we leave basecamp for the last time for the summit of the world. I am unsure of our exact schedule yet. But tomorrow we will make the long push, 17km and 1200m of vertical height gain from basecamp to advanced basecamp (ABC) at 6400m. From ABC we will again monitor the weather and decide when to push higher.

Team briefing at basecamp this morning

I will make updates by voice post from my satellite phone. If you see a post from me titled VOICE POST this will be a short voice recording I have made from the mountain. You can replay this on your computer. (For some reason it does not work well on IPAD’s I am told?)

I feel so fortunate and excited to be in a position to be about to ATTEMPT to realise my dream. My dream is not just to stand on the summit of Mt Everest. My dream is to climb those final 500m vertical metres of Everest’s North East Ridge to the summit. The 500m which I missed last year. To climb along the highest ridge traverse in the world. To feel the exposure under my feet looking down to the mighty Rongbuk Glacier 10,000 feet below. To work my way over the three infamous rock steps. To stare down into Nepal and Tibet from 8848m.

I am also afraid of failing to reach the summit this year. Failure hurts. Not because of what I think I look like in front of other people, but internally within myself. Getting up every morning and looking in the mirror as I brush my teeth I get reminded of who I am. Sitting in a crowded bar, in the office, on a plane my mind frequently drifts away to the North East Ridge of Everest. 6 months ago when I announced I was returning to Everest a friend asked me – what happens if you fail again? I told him truthfully that if I fail it will be very hard. But my desire to climb the ridge is stronger than my fear of failing to climb it. I cannot live my life failing to attempt.

We have a great team of Sherpa’s with Altitude Junkies. They have worked extremely hard stocking the high camps and getting oxygen into position. Attached is a photo of them taken this morning. What a wonderful bunch of men, epitomizing the qualities that make people great. Tough, hard working, friendly, extreme athletes at altitude, yet so down to earth, honest and humble. In turn for their hard work I am proud to say I am on an expedition where they are very highly respected and treated extremely well. 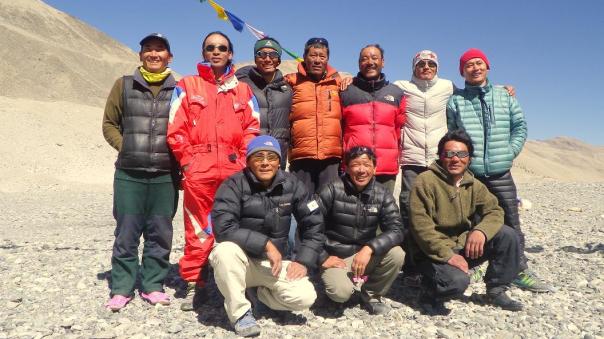 On summit morning from camp 3 , I will be climbing with Pasang Nima Sherpa (see attached photo). As with many Sherpa’s, Pasang Nima is small in stature but huge in power. Being able to carry loads of oxygen cylinders/tents and other equipment up to 8300m, where most people who live at sea-level would not be able to drag their own body weight. He also makes me look tall which is quite rare. I kind of like taking photo’s beside him. 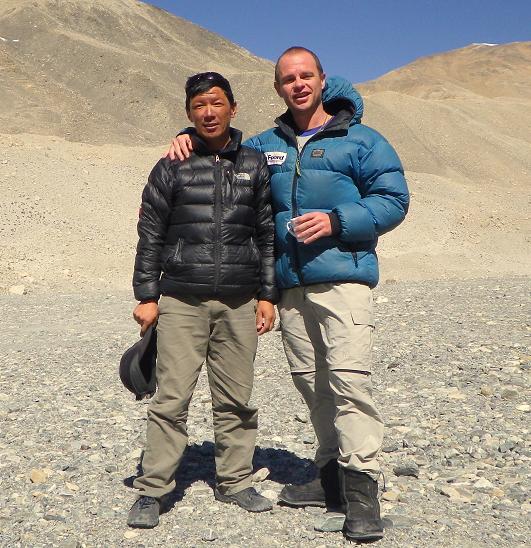 Finally I want to thank the following people who have enabled me to be in this position today:

Graham, Dicko, GT and the team from John Foord

Darren Blakely and the team from UFIT

Chris, Jasmine, Steve and the team from Citygolf

The staff from Kongsberg Maritime especially Edina Lee, Siti, Latif, Bill Stuart, Phil Andrew, Daryl Morse and Geir Skogen who cover my duties when I am away.

To the Taranaki Rescue Helicopter Trust – Michelle and Jayden, thank you for allowing me the opportunity to work with you and give something back to my home province which has given me so much.

To the people following my blog and making positive comments and wishes. I hope I can repay your enthusiasm and generosity of spirit.

Finally to Stephanie my wife. Thank you for for being you and allowing me to be me.

I will have my satellite phone with me on the mountain. If you would like to send positive messages of support the number is below. Its probably not a good time to call me to sell insurance or a new credit card as I won’t be too interested, plus I don’t have any money. I can tell you that messages of support when I am in the high camps, breathing oxygen, lying in my tent in minus 30 degrees C, feeling exhausted and a little scared give a huge morale boost.

You can send short messages from your mobile phone or from:

Input my number and enter a message less than 100 characters (its says 160 characters but that is not correct – it cuts off some of the message if its too long).

Please be sure to enter your name when you send a message – so I know who you are!

This is Axe signing out for the last time before the summit push from Everest basecamp in Tibet.

Leave a Reply to AM Cancel reply