I departed Mt Isa just after 4am on day 18, for a 125km ride to the next town of Cloncurry. I was very privileged to have been hosted for two nights in Mt Isa by Craig and Vicki and their lovely family – they were a great ambassadors for the town, opening up their home to a complete stranger and even introducing me to kangaroo stew.

The temperature has now dropped significantly and I rode in a thermal long sleeve, shell jacket and high vis vest in the darkness.  The first 60km had a few hills and there were dead kangaroos everywhere along the road. I startled an alive one and it hopped across about 10m in front of me which gave me a scare.  They are quite large and I have no illusions about who would come off second best between a kangaroo and cyclist collision.  This section of road had very little shoulder and it was dangerous with road trains coming past and other smaller trucks which are in fact worse than the road trains.  The size of the truck seems comparable to the size of the brain of the driver in these parts.

The headwinds started blowing harder as the sun came up, not strong enough to blow the flies away though and I chugged slowly into Cloncurry just after lunchtime.

Cloncurry is a small rural town which services the farming and mining community.  It is also the original  home of the flying doctor service in Australia and has a couple of interesting museums. The following day I had a conference call scheduled for midday for a speaking engagement and needed a mobile connection so decided to take a sightseeing day around the two museums and take the conference call.

It felt too cold on day 20 to leave early which was a pathetic excuse and I paid the price for a tardy 730am start.  This day I rode east for 12km before turning off onto the Landsborough highway and heading south east – directly into the wind.  What a miserable day I had as I battled for every kilometre.  The wind was constant and strait in my face and reduced my pace to just over 11km per hour. It felt like I was forever cycling uphill and it stole my energy and the strength from my legs. I had zero interest in the landscape around and me and just focussed on grinding down the miles until around 4pm and 106km I arrived in McKinley. McKinley has a Roadhouse and a pub known as the ‘Walkabout Creek Hotel’ which was featured in the movie Crocodile Dundee.  I felt a little beaten up on arrival and chatting to the owner she told me I am the first cyclist she has met who is cycling in this direction. Everyone else comes the other way with the wind behind them.

I departed the next morning at 0500hrs and once again struggled with the early morning cold. Even though the wind is slightly less at night I find it very boring riding in the dark now. I can only concentrate on the small light of my front bike lamp to illuminate the white line in front of me and am ever on the alert to be skittled by a mad kangaroo. By 0800hrs the wind was up in full force. It reduced my speed to 8-9 km per hour. What a nightmare of a day. I hated every bit of it.  At one stage I got off my bike and pushed it as I thought it may be faster than riding. Pushing it I could do 6.5km per hour. So at least 8km per hour was faster than walking.  I employed every mental strength technique I knew to get through the day.  Nothing worked very well and my strength and my confidence ebbed away hour by hour. I felt weak and tired mentally and physically. I wondered what the hell I was doing here. I missed Stephanie and Kate and Rachel. If someone stopped and asked to help I would have willingly given them all my bags and asked them to carry them to the next Roadhouse for me. I began to question my ability to finish the cycle ride to Coffs if the conditions were like this all the way. Just as things got really bad I got a flat back tyre.  I couldn’t be bothered changing it so kept pumping it up every few km as it was a slow leak until I eventually made it 75km in just under ten hours to the tiny town at Kynuna. I sat in the Roadhouse like a stunned mullet and ate a pie and demolished a milkshake.

That night I changed my tyre and gave myself permission to feel like shit.  Expeditions are like this – they are not romantic fairy tales which every day you laugh and dance and rejoice for being ‘out there’. Just like life, there are bad days and you need the bad days to appreciate the good days. My confidence had taken a real battering over the last two days and I felt weak, 100km per day now sounded like an impossible feat whereas one week before it had been a cruise.  I went to bed at 730pm and set the alarm for 3am with the knowledgable I had another long stretch of 165km to the next water stop /Roadhouse into this nightmare of a headwind to cheer me up.

I set off at 0315hrs on day 22 – so cold my toes and hands were numb. If the temperatures drop much lower than this I will need to upgrade my clothing. The wind was blowing lightly only and I managed to make 17km per hour progress for hour after hour in the darkness.  It was too cold to stop so I rode continuously for four hours.  The occasional road train passed me but at night I see them coming for miles and I can tell if they see me as they dip their lights.  I almost feel safer with traffic when cycling at night.  I came across 2 x kangaroos having a chat in the middle of the road. I startled them and one took off up the road in front of me. I ended up chasing it for about 2km before it bounced off into the grass. No wonder they get killed by cars and trucks.  Just after 7pm I stopped for muesli and curdled milk for breakfast (my three day old milk had curdled but it still tasted ok – like yoghurt, thanks mum for the advice!). 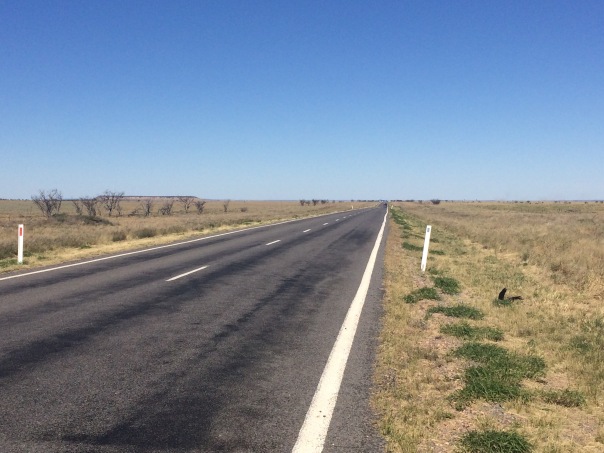 As I ate breakfast I noticed the wind had stopped almost completely. I gave a small whoop of joy, this was my opportunity to make miles so I was quickly back on the bike and kept pounding the pedals. I was determined to ride until the wind stopped me, it did start to pick up later on but never as bad as the last two days. I passed a poor kangaroo which had been hit by a car but  still alive, it stared at me as I cycled past. I wished I had something to put it out of its misery.

I am now in wide open farming country – flat as a pancake. The roads are long and strait and only slightly undulating.  Perfect cycling roads for making miles if not for the wind. I stopped when I came across a paddock with 25 beautiful horses. It made a change from seeing dead kangaroos and the occasional cow. Eventually after 9.5hours in the saddle and 165km I pulled into the town of Winton, my confidence restored and the expedition firmly back on track. 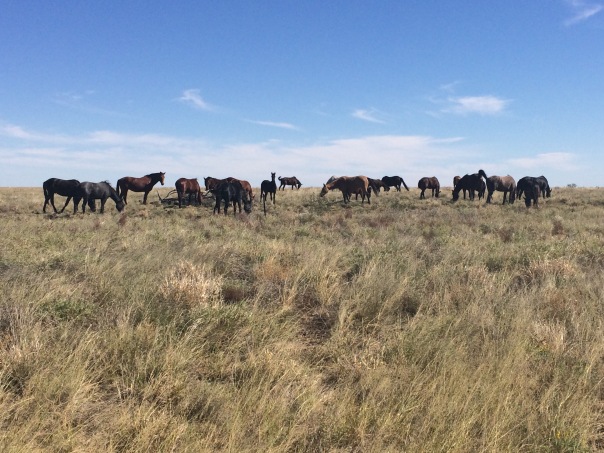 Today I am taking a rest day here in Winton before another long 180km push to Longreach starting tomorrow.

My thoughts go out to the victims and families in London.