With great happiness we departed the flea pit of Tingri for a bumpy and dusty 5 hour drive up to Everest Basecamp. As we crossed the Pang La pass at 5200m the whole of the North face of Everest became visible. The North Ridge was clearly visible and cloud was billowing off the summit. It was still another two hours drive until we finally arrived at the head of the Rongbuk glacier where our basecamp is located at 5150m. You can see the position from the GPS spot tracker:

As we drove in I reflected on my journey so far to Everest Basecamp and compared it to the early expeditions and especially George Mallory who in 1924 took many months to sail from England and walk for weeks across this barren inhospitable countryside before arriving at the foot of the mountain. All this with no communication with their families back home, apart from the occasional mail bag which may arrive several months after being written. My journey has been slightly simpler and has involved flying to Kathmandu in 5 hours from Singapore, followed by a 5 day drive – all the while having full 3G mobile phone reception the entire time!

I did not come away completely unscathed from the drive through Tibet, and have a slight stomach upset. No diarrhea but it lets me know some strange stuff has been consumed. Another team member contracted a much stronger dose and has been in the toilet very frequently since we arrived.

Our sherpa team arrived 2 days before us and did a magnificent job of setting up the camp before we arrived. We each have our own personal tent to sleep in and unpack all our gear. There is a kitchen tent, with some carpet lining the floor and a dining table, cooks tent, toilet tent and even a shower tent! I am extremely impressed by the set-up and having being used to climbing lightweight and independently most of my life this kind of lavish arrangement makes me feel slightly guilty! I am consoling myself with the fact that after time spent up higher on the mountain in the brutal conditions then it will be nice to get back to basecamp and recover. There are several other expeditions here, some much larger and more luxurious than ours with table tennis tables in their mess tents! 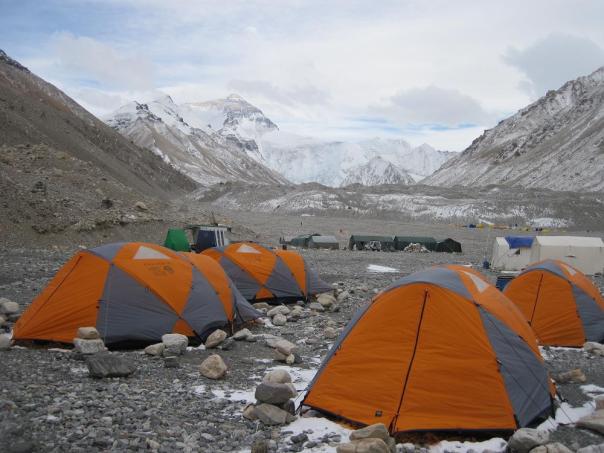 Everest Basecamp at 5150m with the North Face of Everest behind

We were greeted into basecamp by a snow storm which lasted around 2 hours and obliterated our view of Everest. Since then most of the time the entire North Face of the mountain is visible and it is hard not to stand in awe and stare, up, up, up for what seems like for ever, following the North Ridge until it meets up with the North East Ridge and onwards to the summit. Oh my god it looks like a long way. It also looks very cold, windy and steep up higher. Quite an impressive sight!

Its been a rapid rise to basecamp here at 5150m, I have had a slight altitude headache and am taking things very slowly. We will stay at basecamp here for the next 5 nights doing day walks and acclimatising, until the 24th April when we will leave for a 10 – 12 day acclimatisation trip, up as far as the North Col located at 7000m, maybe slightly higher.