Returning rock’s to the summit of Everest

I have been continuously blown away by the support that I have received from certain quarters for my Everest climb.  From my wonderful sponsors, to individuals whom I hardly know. This week I met up with a guy whom I respect enormously for the style in which he climbs, and I try and emulate in my own climbing as much as possible.  Alan Silva is a quietly spoken, humble and intelligent guy, who has made bold alpine style ascents of difficult peaks all over the world.  He summitted Everest in 1998 where he worked as a guide.  Living in Singapore I bump into him every now and again climbing in Bukit Timah.  When hearing I was headed to Everest next year, Alan invited me to his house and we spent 3 memorable hours together as he took me through all the clothing systems, rope systems and numerous other tips and tricks (5 pages of hastily scribbled notes worth!). Alan also had an oxygen cylinder and mask which he had rescued from the South Col on Everest, and it was the first time I had an opportunity to try on the regulator and get a feel what it was like.  He also then offered to lend me his downsuit which he wore on Everest in 1998.

Finally he passed me a small rock which he had taken from the summit and asked me to return the rock to the summit on my attempt on Everest in April 2011! How is that for a motivation technique? The only issue with the down suit was that it has the Australian flag sewn onto the front of it! Whilst being quite fond of my neighbors from across the Tasman, Alan saw my confused stare whilst eyeing up the flag and kindly said no worries, I am can unpick the flag if I wish – Phew! 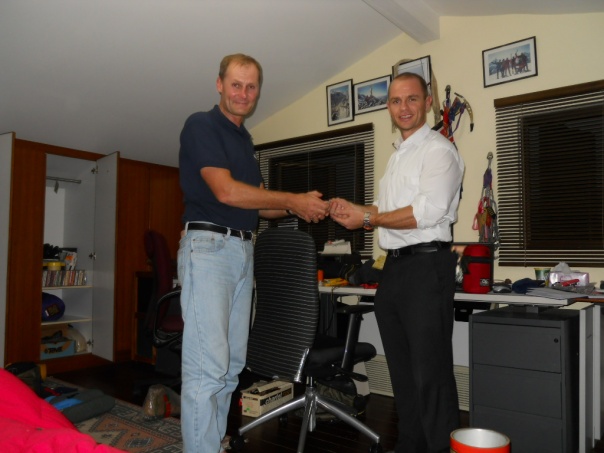 With Alan Silva December 2010, getting passed the rock from the summit of Everest. 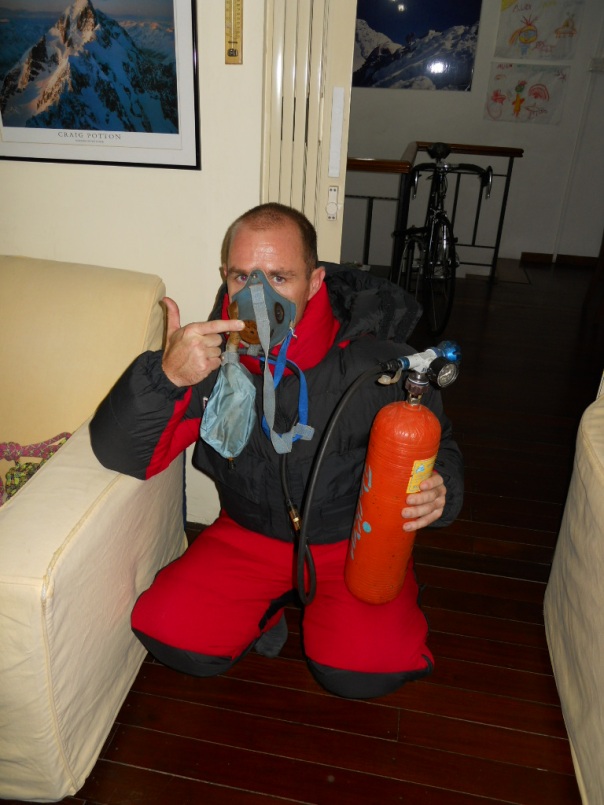 Trying out the oxygen system and the downsuit

Saturday evening turned out to be much more adventurous than anticipated.  I had found a spot in Bukit Timah to do a long 50m abseil down into a lake, then swim across the lake and do a 30 minute walk back around to the abseil point.  Basically an adventurous training circuit which beats doing rounds and rounds of stairs.  Rustling up my trusty climbing buddy Lamby, we met at 4:30PM and wandered up the abseil point where I set up an anchor and threw the rope down.  Now it’s a free hanging vertical abseil, of 50m, and poor Lamby had not tried this type of abseil before (i.e. hanging free).  At the top I made the call to send him down first, as I was worried about leaving him to set-up his abseil correctly.  With instructions to go carefully and stop if he sees a knot in the rope and fix it, off went Lamby over the edge.  To cut a long story short, 25m down he ran straight into a knot and got stuck there for an hour!  Dangling 25m above the water, it took him a very long time to sort out the mess, using prussiks (small ropes tied around the main rope), he finally managed to extract himself, and then hurtled down the last 25m with his strength gone, he hit the water with a huge splash and large burn marks on his hands.  By this stage I had gone into rescue mode and had started descending the rope using my prussiks only.  I heard the large splash and after calling out there was no reply from Lamby (although he says he answered!).  I had 2 terrifying minutes as I changed back to normal abseil and carefully lowered down off the top.  I had all sorts of awful images going through my head of his broken body lying face down in the water.  Thank god when I popped over the edge with 47m of air below my feel – there he was standing in waste deep water looking up at me! I carefully lowered down to where his two prussiks were still wrapped around the rope so tightly he could not get them off, untied them and joined him in the water.  I then spent the next hour scolding him for scaring the crap out of me, and today feel terribly guilty for what I said to him, however he sure did give me a fright!  I was also a little worried about almost having gone over the edge using only my prussiks to descend almost 50m of free hanging rope to try and help him out.  Our next abseil session will be in a more controlled environment and we will practice working out how to fix a knot on the rope! 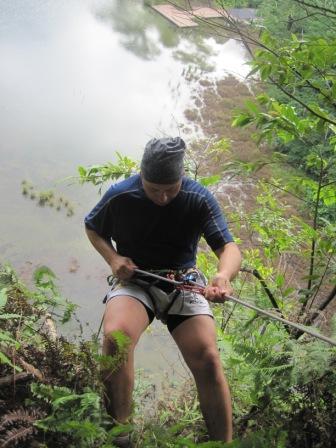 Lamby about to abseil off into real mess!

I ran the Singapore marathon this morning.  My trainer Darren Blakeley of UFIT, had graciously allowed me to take part in the event (he is not a fan of this kind of run, especially for me in this phase of my training), however suggested earlier in the week I run it very slowly with a backpack and 15kg of weight.  Last night while preparing, I put the weight on my back and did not feel confident I could finish in one piece with the pack weighing me down so made the decision not to wear the weight.  This morning at 5:30AM I ran past the starting line and had a very enjoyable first 22km, which I ran in 2hrs 30mins.  By 32km I was getting a little sick of the running and the overcrowding in the race which I never escaped from the entire 42km.  The last 5km especially went fairly slowly but I finished with plenty of gas in the tank, which was the whole aim of the race.  I now have some slightly sore knees and feet from the constant pounding but apart from that feel pretty good. 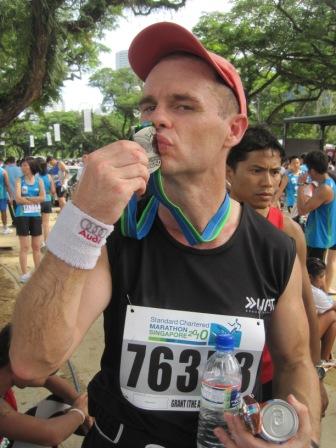 Training is back into full swing after my rib injury of a few weeks back.  I had a 2 week layoff from the gym, and interestingly returned this week to lift heavier than I have ever had before.  Sometimes a break does the body good.  I have gained a fair deal of lean muscle since training which was Darren from UFIT’s objective. I am quite amazed that I have made 20 – 30% gains in strength yet bulked up very little.  When playing rugby in the National team I was around 73 – 74kg, with much more bulky muscle mass, now I am 69kg, and almost as strong as my rugby playing days.  The difference is how I lift weights.  To build lean muscle mass I am lifting as heavy weights as possible, but reps of only 4 – 5.  To gain bulk I used to lift as heavy as possible but reps of 10.  There is a huge difference in the outcome.

This week’s workout with Darren was very satisfying for me.   6 years ago when Darren was training me for the national 7 aside rugby team, he told me I MUST have breakfast before his gym sessions.  Thus I ate just before the session.  He then destroyed me by putting me through an intensive circuit session of 2 minutes on the bike, 2 minutes running, 2 minutes jumping up stairs and repeating the cycle, whilst trying to keep my heart rate above 150bpm.  Within 30 minutes I was in the toilet vomiting up my breakfast!  This week we had a pretty tough gym session, and it was Darren’s turn to hit the toilet and bring up his lunch. Revenge is sweet, especially after waiting 6 years!!

Well, it’s only 15 days till I get married to Stephanie in Taranaki, New Zealand; we are both very excited about the big day.  There seems to be a lot to do between now and then with a trip to India this week, last minute planning for the wedding, packing, working and training.  I am also pretty pumped about getting back to Taranaki and climbing Mt Egmont/Taranaki, the beautiful volcano which dominates the Taranaki skyline.  This was the first real mountain I climbed when I was 14 years old, and it will be great to be back on a real mountain for some Everest training.

I hope to squeeze one more blog in before Christmas, however if I don’t, I wish all readers a very merry Christmas and a Happy, drunken and prosperous New Year!